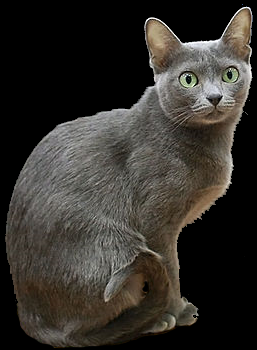 What is the Korat breed?

This is one of the oldest natural breeds. Sometimes confused with the Russian Blue, the origin is however not the same. While the true origin of the Russian Blue is uncertain, the Korat is indeed from Thailand. The first Korat cats imported to the United States were Nara and Darra June 12, 1959 by Cedar Glen Cattery in Oregon. These cats were from the cattery Mahajaya in Thailand.

These beautiful cats are characterized by a silvery blue dress and amber eyes that pass to a vivid emerald 2-3 years after birth. It is also one of the few breedsto have no undercoat, which could makes it a little less allergenic than other breeds but also more sensitive to cold. Another unusual point of the race, while most cats have an average life expectancy of 12-16 years, it is 16-22 years for Korat cat breed! Besides, did you know the oldest cat known to date was Creme Puff? She died at the age of 38 years and 3 days! It’s almost unbelievable. I sometimes wonder if his master is not in error by 10 years, because even 28 years would be exceptional.

The Korat sometimes behave like a dog when it’s time to throw a ball for example. While another cat would jump on the ball and play with it there, it is common for the Korat to bring back the ball to his master for a new throw. While other cats become passive with age, the Korat remain active longer.

Learn more about the Korat by Googling for it, or click here! 😉

Why a cat and why a Korat?

Like almost all children, ours love animals. It was time to think about getting a companion and the cat seemed more appropriate for our family. I was looking at all the different breeds in Wikipedia when I noticed “no undercoat” in one of the boxes. Curious, I checked the meaning and looked at all the breeds with no undercoat and the Korat caught my attention. I started reading about it and the more I read, the more I was interested to the point where I ended up convey this enthusiasm to my girlfriend and she agreed to move forward. Pretty interesting, no? And if you go read more about the Korat, chances are you might also get interested to this lesser known breed.

It was time to announce to our children that we have agreed to have a cat. They were super-mega-excited. You should have seen their smiles and general behavior for the rest of the day. We suddenly were the best parents in the world!