My name is Daniel and I’m born on July 24th of 1971. I live in the beautiful city of Québec City in Canada.

Many use a nickname to surf the internet these days. Mine comes from a book I’ve read (one of the rare) which is entitled Rhialto the Marvellous written by Jack Vance.

I never liked mandatory readings while attending High School and College, but, after I received a very good grade on a test in High School, I was privileged to get a prize. I was given directions to go to the display cabinet to view all of the prizes. I forgot some of the items I saw there, but I remember there was several books on display. After a quick check at the book covers and reading some pages, for some reason, I stopped at this one particular book. But I asked myself, “why did I want to choose a book since I do not like to read”. I have always been fascinated by the imaginary world of the dungeons and dragons along with all of the magic with those types of stories. This book was about a magician, and since it was not mandatory to read it, I told myself “I should read this”. The result – I liked it.

This is the cover of the 1985 edition which I find fascinating, made by Philippe Caza. 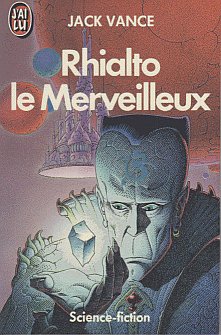 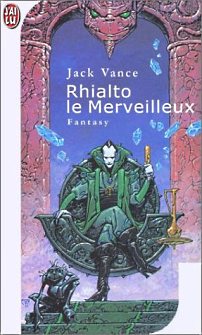 The french resume on the back read like this:

Jack Vance, who’s real name is John Holbrook Vance, was born in San Francisco August 28th, 1916 and educated at the University of California, first as a mining engineer, then majoring in physics and finally in journalism. During the 1940s and 1950s, he contributed widely to science fiction and fantasy magazines. He passed away on May 26, 2013.

You can learn more about this prolific author by reading the Wikipedia’s article or by visiting this website in memory of him.